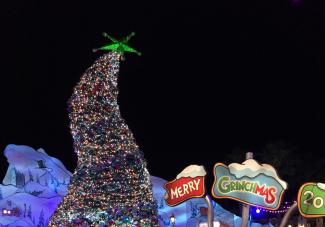 How the Governor of the Bank of Canada stole Christmas

How the Governor Stole Christmas

(Based on the book ‘How the Grinch Stole Christmas’ by Dr. Seuss)

Every consumer in Canada liked spending a lot! But the Governor who ran the Bank of Canada did not!

The Governor hated spending! The whole spending season! And we all know why. We all know the reason.

It’s partly because the labour market’s too tight. It’s also because the balance in the economy’s not right.

But I think that the most likely reason of all Is that inflation still has a long way to fall.

But, whatever the reason, jobs or inflation, He stood there on Wellington in grim consternation

Staring down from his office with a sad, forlorn frown. For the world’s toughest central banker he had the crown.

And he knew every homeowner in Canada yon, Was wondering where all their home equity had gone.

“And they’re looking at their shopping lists,” he sighed, so sincere. “Soon it’ll be Christmas! It’s practically here!”

Then he groaned, with his macro models endlessly humming, “I must find some way to keep Christmas from coming!

For, this week, I know that all Canadian families are spending their stimy cheques ordering goods in their jammies

And then they’ll groan and gripe, complaining about hikes. As if making their lives harder is something I like. I know that their grocery bills are causing them pain, And their monthly mortgage payments are now doing the same.

At the same time their home values are going down in flames, They have a lot of good reasons to grumble and complain

And when they see their credit card bills on January one, They’ll say, “That Tiff Macklem guy in Ottawa isn’t much fun!”

He thought, “I must find a new way to get out of this rout Why for over a year I’ve dealt with inflation now! I must stop Christmas from coming! But how?”

Then he got an idea! An awful idea! The Governor got a wonderful, awful idea!

“I know just what to do!” The Governor said without ire. “I’ll surprise them by moving rates 50 bps higher.”

And he shrugged, and then sighed, “What a tough situation! But how else am I supposed to bring down inflation? “All I need is a press statement.”

The Governor looked around. And from the Bank’s Comms department, a draft was soon found.

So he took some paper, and he took out his pen, And he changed 25 to 50bps, and then

Then the Governor said “Huh!” and he started to frown As he thought that may be too much for Canadians to down.

“I’ll say that I’ll stop,” the boyish-looking Governor shouted, But what if he was wrong again and people wanted him ousted?

Then he slid in a line that was oh so resplendent. He would tell people future hikes will be data dependent.

He got stuck only once, for a minute or two. Then felt inspired in writing as his pen flew.

And so markets wouldn’t infer there was something to know, “Forward guidance,” he quipped, “is the first thing to go!”

Then he told all his Deputies, with a smile most unpleasant, He’d squeeze Canadians further, and he’d take every present!

And he’d make sure that inventory piled up on the shelves, “It’s empty stockings this Christmas for all Santa’s elves.”

The unemployment rate will rise soon, at the very least, As growth in consumer spending will eventually cease.

Households will feel it as quick as a flash. And they’ll need to fall back on their large savings stash!

Then he signed off on the press statement with glee, “Now,” grinned the Governor, “I will sit back and see!”

Its impact was immediate. Like the act of some deities, The yield curve became the most inverted since the eighties.

Pushing up the prime rate, the variable rate, fixed too, Not surprisingly, away the cost of consumer debt flew.

“Pooh-pooh to Canadians!” he was eagerly humming. “They’re finding out now that no Christmas is coming!

They’re just checking the news! I know just what they’ll do! Their mouths will hang open a minute or two. Then households across Canada will all cry boo-hoo!

That’s a noise,” grinned the Governor, “that I simply must hear! It means inflation expectations will come down. Never fear!”

And he did hear a sound rising over the snow. It started in low, then it started to grow.

Most households in Canada, the tall and the small, Were getting a slice of government revenue windfall!

He hadn’t stopped Christmas from coming! It came! Thanks to fiscal largesse, it came just the same!

And the Governor, with his gaze looking out over Ottawa’s snow, Stood puzzling and puzzling. “How could it be so?

He puzzled and puzzled till his puzzler was sore. Then the Governor thought of something he hadn’t before.

And what happened then? Well, in Ottawa they say That the Governor’s resolve grew three sizes that day!

Then the true meaning of inflation targeting came through, And the Governor found the strength of ten Governors, plus two!

And now that monetary policy didn’t feel quite so tight, He prepped to take interest rates to new, higher heights.

With a heavy, heavy heart, he scoured the economy, Looking for an excuse to exercise his autonomy.

He had to cool the economy. He didn’t doubt that. And if governments wouldn’t help, well he’d give it a whack.

He’d bring the output gap down to something more closed, And may even need to engineer a recession, he supposed.

He’d need to be prepared to raise rates, at the least, To regain control over the inflationary beast!

So beware of too much Christmas cheer, More rate hikes could come, which we all fear.

Lower inflation is coming soon, Let’s not cause it to resume.

Fiscal prudence is the call, To make sure that prices fall.

Welcome Christmas but take heed Set some aside for future need.