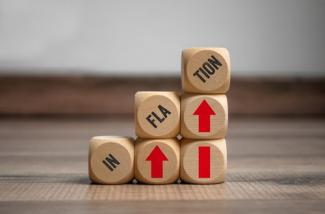 Inflation: Will it stay or will it go?

On July 13, the Bank of Canada set in motion a sharp increase in interest rates by increasing the overnight target interest rate by 100 basis points (1% for non financial nerds) to 2.50%, a surprise move beyond what was anticipated by economists. This was the first 1% hike since 1998. The Bank of Canada was widely criticized in recent weeks for being behind the curve on raising rates aggressively to combat inflation, especially after the US Federal Reserve ("The Fed") increased rates south of the border by 0.75% a few weeks ago.

->This sharp rate hike shows that the Bank of Canada is resolute in bringing inflation back to target. Canada’s high inflation levels in May’s reading at 7.7% year over year, as well as the reading in the U.S. for June also announced July 13 at 9.1%, reinforced the need for the central bank to act aggressively. The BoC also re-iterated the need for rates to rise further, and the pace of increases will be guided by its ongoing assessment of the economy and inflation. With the strong CPI reading in the U.S. showing that inflation has yet to moderate, the market is pricing in even more aggressive tightening later this year.

->The rate hike comes on the heels of a very strong jobs report in Canada in early July, with the unemployment rate at 4.9%, the lowest on record since the 70s. The labour market is strong, albeit with a lower participation rate, especially for workers aged 55 and higher.

->The BoC made good on its intention to hike forcefully. With commodity prices falling sharply and oil prices falling below US$100, we may be at the beginning of seeing inflationary pressures ease. That stated, it is likely that the BoC will continue to hike rates into restrictive territory later this year.

->We believe the odds of recession have risen to close to 50% over the next 12 months. However, even if Canada slips into a recession, we believe it will be relatively shallow given underlying economic strength.

While these sudden sharp rises in interest rates may be alarming they are part of the Central Bank's plan to combat inflation and while the adjustment in expectations has been difficult the higher interest rates that are in place now may mean better returns for fixed income investors in the future.