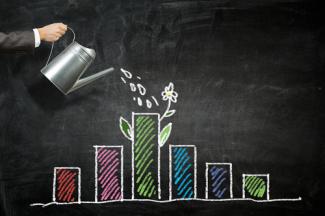 At the risk of slowing economic growth, the Federal Reserve and the Bank of Canada have driven short-term rates higher to rein in inflation. But it’s a tricky proposition.

Raise rates too much, and you trigger a recession. Don’t raise rates enough, and you won’t be able to restore price stability. The Fed and the BofC are looking for a Goldilocks moment monetary policy is “just right” to create a soft landing for the economy.

The good news is that there are early signs that inflation is starting to slow. However, most people judge inflation by prices at the gas station or grocery store, so inflation is genuine and painful until those prices trend lower.

History shows that economies and markets move in cycles, and despite recent volatility the current trend is most likely healthy in the long term. Finding the Goldilocks solution to today’s decades-high inflation will be tricky and Central Banks are working hard to make difficult decisions following an extraordinary couple of years.

These attempts by central banks to curb inflation with large interest rate hikes dominated news headlines this year and weighed on investor sentiment. U.S., Canadian and global equities ended the quarter, and the year, in the doldrums, dragged down by inflation, rate hikes and the Russia-Ukraine conflict. Despite this, there have been a number of positive economic indicators recently. The unemployment rate in the U.S. and Canada remained low, job vacancies grew and Canadian house prices continued cooling.

Inflation in the US reached 8.6% earlier this year, prompting the Fed to increase rates by 3.75%; the biggest rate increases in decades. In Canada, inflation kept climbing as well, to 7.7%, the highest since 1983, driven predominantly by gasoline prices. The Bank of Canada raised the prime lending rate to 5.95%, causing direct pain to Canadians with variable rates mortgages and loans.

This year has been a bumpy ride as we’ve experienced a market correction with valuations repriced for higher interest rates. While extreme swings are stressful, the worst is likely behind us or at least peaking. A clearer indication will be once we achieve a few months of declining inflation. Economic fundamentals including consumer demand, wage growth, job vacancies and corporate earnings remain healthy. It might take time, but a rebound will occur and history has proven investors are rewarded over the long-term.

Regardless of where we are in the market cycle, it’s important to take a disciplined approach to investing and stay focused on your long-term goals. This strategy helps you keep your emotions out of investing, typically buying high and selling low like many investors do. Ongoing monitoring and reviewing of your portfolio also ensures it remains on track. Diversifying investments reduces risk as well.

We are here to support you in achieving your financial goals. Please do not hesitate to contact us.